Free Delivery on orders over £100

Only 2 left in stock

The Isabella Shadow Canopy 300 is a multipurpose touring canopy which can be put up quickly, no matter where you are. In addition to being mounted on the caravan itself, the Shadow can also be used as a side canopy on your awning. The Shadow canopy gives you extra shelter and protection against the sun and also gives you some extra handy outside covered space for what ever your needs. The Isabella Shadow canopy has particularly strong and stable pins on the poles and metal rings in the roof and provide optimal tensioning and the greatest possible stability. The Shadow canopy is supplied as standard with Typhoon storm sashes, transport bag and pole bag. The canopy is remarkably light and easy-to-maintain material. The Shadow canopy comes with two CarbonX poles for fitting. Easy to maintain and care for, simply vacuum or brush the canopy off when it is dry, then simply wipe with a damp cloth. 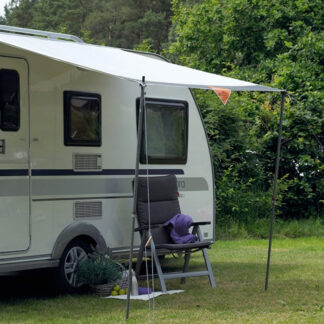 Please note: Orders are being dispatched as normal, however some courier services are running a little slower in some areas. Dismiss